Get Out of the Rain

Precipitation is at 60% and the wind is 23km/h today, so today’s the perfect opportunity to use Jeremy Lwin’s Open Door Policy, get indoors, and stay dry.

If the new Student Rights Collective space next to the dentist hasn’t satisfied your need for a nap, Jeremy Lwin’s office couch is right next to his open door and is the perfect place to have a quick snooze between classes.

We’ve crunched the numbers, and Jeremy’s office is the perfect size to host QUT’s Toga Party. The nature of Jeremy Lwin’s Open Door Policy would prevent you from selling any tickets, but all in all it’ll probably still be the most profitable QUT Toga Party of the year.

UQ has pretty strict laws about where you can and cannot smoke, but to our knowledge Jeremy’s Open Door Policy doesn’t apply to UQ Security. If you catch him in a good mood, then maybe he’d be willing to look the other way while you light up. Legally, we’re prohibited from publishing anything might promote the consumption of tobacco under the 1992 Tobacco Advertising Prohibition Act, so the advice in this article refers specifically to the use of medical cannabis as prescribed by a health care professional.

Jeremy Lwin’s Open Door Policy is a win for students, but it ultimately leaves him defenseless to attack. Once you’ve rustled up a mob, the only thing standing between you and seizing absolute power in the UQ Union will be a few open doors.

Host a Sausage Sizzle for your Club or Society

Making money in a club or society is tough at the best of times, but thanks to the immense foot traffic generated by Jeremy Lwin’s Open Door Policy, his office is a prime location to set up a barbecue and start selling some snags.

With the raging success of Jeremy Lwin’s Open Door Policy, we’re sure to see a rise in similar open door policies. Who better to start the trend than you? Now that the Open Door Infrastructure has been firmly established, pull up a chair at Jeremy’s desk, and just wait for the students to arrive.

You never know when a stray apostrophe use at the bottom of an article might accidentally imply ownership! But with a whole quiet office to yourself, you might find some time to compare the number of errors that appear in UQ’s newspaper compared to QUT’s.

So now you know what you can do with Jeremy Lwin’s Open Door policy, it’s time to make your way up to the Union Complex and give it a go! On the off chance that you’re greeted with a closed door, just remember that when Jeremy closes a door, he opens a window. 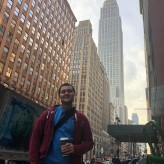